Adventure in China on a 3-litre Sunbeam Super Sports

An account of the 2019 Yangtze River International Classic Car Rally

by Thomas and Renate Treul

We had the pleasure to take part in the above mentioned FIVA World Rally in China in the last two weeks of September 2019. It was an international event of around 50 cars, the oldest a 1912 Wolseley up to Porsches from the Seventies. About 15 cars came from Hongkong, most of the others were from Europe with a few from South Africa and Australia.

The rally started in the outskirts of Shanghai (unbelievable how big that city is and how clean and quiet, thanks to E- scooters and mostly hybrid cars).

After a two-day preparation of the cars and drivers – a technical check of the cars by the China police and the FIVA inspectors, all of them very serious and important; arranging for Chinese number plates for the cars and Chinese driving licences for the participants, plus GPS control on each car ( Big Brother is watching you! ) – we took off. The start of the event was characterised by a kind of culture clash between a very Chinese organisation and a group of 50 individualist car crews trying to arrange their own sightseeing.

It took us a full day of driving to leave Shanghai behind us on our way to Suzhou City in the Jiangsu Province, north of Shanghai, through really flat country- in effect the entire delta is one huge plain. Driving was mostly on national roads but do not be misled, even those have a minimum two lanes in each direction, going up to 4 or 5 lanes. Many of them were dead straight to the horizon; after turning left or right at the traffic lights it was again straight to the horizon……

The next day we continued on our way to Wuxi, north of Shanghai, on very good roads. We were lucky with the weather as we had 28 degrees Celsius most of the time, more on some days. After an impressive welcome by the mayor of Wuxi and other important officials we were shuttled to our hotel where we had a wonderful supper Chinese style. It was fantastic!

The next day we started bright and early and after a farewell parade we set off to Dongtai, still heading North. On our way we were stopped by the local police on the motorway and our Chinese paperwork was checked – as we spoke no Chinese and the officer no English it took a while – we learned that “a while” in China means at least an hour. The officer took out his cell phone to use the translation from Chinese to English and told us “ welcome to China, have a safe trip”. What a lovely surprise this was!

From Dongtai we left the next morning to Changgzou, going South for about 300 km. In doing so we had to cross the Yangtse River again. A second enormous bridge, 6 lanes in each direction, fierce winds (a little Austin 7 was in severe trouble up there, using all the lanes to avoid being blown off the bridge) and incredible freight shipping traffic on the river, the ships were literally queuing up! In that town we had the opportunity to explore the city and went to the food market, where you could buy fresh frogs, fish, turtle and all sorts of wonderful fresh vegetables.

After a farewell parade the next morning we set off South to the town of Ningguo in the province of Anhui and stayed in the most wonderful hotel in a beautiful mountain area. After a day in a hot car it was a pleasure to go swimming in the pool at the hotel. The food was more than delicious and we were all very happy that we could stay at the hotel for dinner.

Our rally took us the next day via Xuancheng to Anji in the Zhejiang Province and the roads were just wonderful to drive on. The trucks were heavily overloaded and were driving just in the middle of the motorway. They seem not to like to use their indicators when they change lanes so we had to watch out – helpful that we had some previous Balkans‘ driving experience in order to maintain our position on the road!

We had the opportunity to stop at Qianqui Village in the She National Park and had a wonderful time on the boat tour on the lake.

The last leg was our way back to Shanghai where we arrived safe and in time for a great welcome at the International Auto Show in Shanghai.

What an adventure it was to drive on Chinese roads, with a Chinese road book of the utmost perfection and not many readable signs around, us or anybody who would speak our language. Having said that, people were super nice and tried to help when we got lost – now we understand the huge advantage of having a proper translation app – everyone has a cell phone and some funny communication arose when locals and guests showed their phones with the translated text!

Some of the sights seen on the way (use back arrow to return): 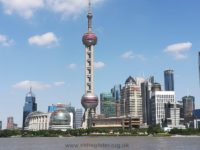 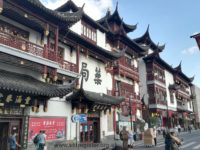